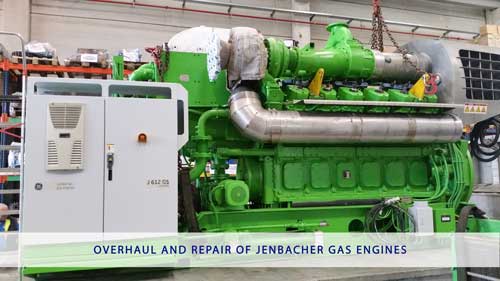 Jenbacher engines are another of RS Motor’s specialties, particularly from the year 2011 when our company begins to have more presence in them, either to perform Service or to supply genuine and/or OEM spare parts. Nowadays, RS Motor is considered one of the best alternatives to the official brand Jenbacher. The large stock of critical items in our warehouse and the continuous updating of the database and knowledge make this possible. Apart from supplying spare parts for Overhauls and/or repairs of Jenbacher engines worldwide, RS Motor has the capacity to carry out Technical Service on them whatever the complexity of the work.

When is it necessary to overhaul a Jenbacher engine?

Despite the above, it is possible that, with certain gases, the hours corresponding to each important maintenance may undergo slight variations up to a maximum of 10.000 running hours.

Of course, these considerations are always valid on the basis that the engine is operating approximately 8.000 hours per year (24/7).

Overhaul is defined as the complete maintenance of the engine, in which all its wear parts are renewed both in its upper part and in its lower part (i.e. main bearings, cylinder liners, pistons, connecting rod bearings, connecting rod bushings…). RS Motor on certain occasions has the ability to adapt to the conditions that end customers may have, especially regarding the period between stopping and commissioning again the engine.

Sometimes, if the delivery time is not important, the Overhaul is carried out at the RS Motor facilities.

If the execution period is a factor to take into account, although not critical, RS Motor send its engineers and specialized technicians to the client’s facilities.

If the delivery time is the most important thing, RS Motor could, on certain occasions, as long as this is possible and there is availability, supply an exchange “shortblock” or an exchange “longblock” equivalent to the one of the end customer.

Finally, if the urgency of execution is the most important parameter, it is even possible to offer the possibility of supplying an exchange engine compatible with the Overhaul previously carried out. This engine would be fully assembled and would be “plug & play”, so the plant downtime would be the minimum possible.

Join them and ask us for availability and price if you are determined to try another company that is not the usual one you work with. RS Motor is considered by many as the best alternative to the Jenbacher Official Service. Several years of experience performing Service, and the supply and installation of genuine and/or OEM spare parts support us.