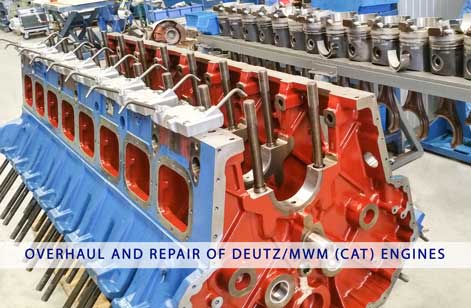 When is it necessary to make an overhaul to a DEUTZ/MWM (CAT) engine?

The answer to this question depends on several conditions.

The first of these is the quality of the gas that the engine consumes. Typically, for relatively modern DEUTZ/MWM (CAT) gas engines, if they run on natural gas, the Overhaul is usually performed at 64.000 running hours. However, for the same engine model, if it operates with another type of quality gas of lower quality, the Overhaul is at 48.000 operating hours due to the higher wear of its critical components.

The second determining factor is the year of manufacture of the engine. For older Otto cycle engines, regardless of the gas they consume, it is common to carry out the Overhaul each 48.000 hours of operation. However, in recently acquired engines, the manufacturer indicates that the major revision or Overhaul can be extended up to 80.000 running hours in many cases, as long as the engine consumes natural gas or other gases of high purity and quality. This is not applicable to biogas engines.

The third and final factor is the engine operating conditions, since an engine that operates 24/7 cannot be compared with another that operates intermittently. That is why, the fewer hours of operation, the more the Overhaul time must be advanced in DEUTZ/MWM (CAT) engines.

On the basis that an Overhaul is a complete maintenance of the engine, in which all its wear parts are renewed both in its upper part and in its lower part (such as main bearings, big end bearings, pistons, cylinder liners, camshafts, torsional vibration dampers, wear farts of cylinder heads…), RS Motor on certain occasions has the ability to adapt to the conditioning factors that end customers may have.

Sometimes, if the delivery time is not too important, the Overhaul is carried out at the RS Motor facilities.

If delivery time is a factor to take into account, although not too important, RS Motor send its engineers and specialized technicians to the customer’s facilities.

If the delivery time is the one of the main factors, RS Motor could make available to the client, as long as this is possible, an exchange “shortblock” or an exchange “longblock”.

Finally, if the delivery time is the most important thing, it is even possible to offer the possibility of supplying an exchange engine with the Overhaul previously done. This engine would be fully assembled and would be “plug & play”, so the plant downtime would be the minimum possible.

Customers around the world already trust RS Motor when they need to overhaul their industrial engines, whether they are gas or diesel.

Join them and ask us for availability and price if you are determined to try another company that is not the usual one you work with. RS Motor is considered by many as the best alternative to the Official Service of the engine brand due to the fact that many years of experience on Service and the supply and installation of genuine and/or OEM spare parts make this possible.