Overhaul and reconditioning of industrial engines 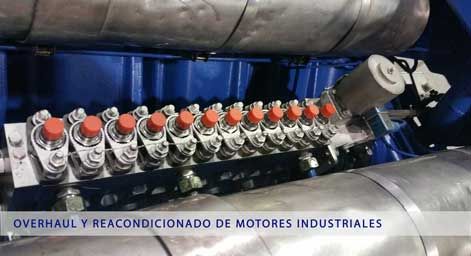 Our workshop performs daily reconditioning on different parts of industrial engines, and additionally Overhaul on them.

Today we show you the main steps to carry out a revision over any of the industrial engines that RS Motor usually has in its facilities.

These engines operate mainly with natural gas, biogas or other types of gases. There are other industrial engines that RS Motor regularly works on, although in that case they are diesel engines.

What is an engine Overhaul?

We define Overhaul as the complete disassembly of an industrial engine, either at RS Motor or at the customer’s facilities, to then proceed with the examination of its disassembled parts, repair and/or recondition them, replace the spare parts susceptible to wear and finally return to assemble the whole set.

The reason for the Overhaul is to leave the engine ready to run another full duty cycle, which will depend on the engine manufacturer according to its specifications.

When is an Overhaul necessary?

Usually, the overhaul of the engine is defined according to the manufacturer’s maintenance plan, where they are specified the operating hours at which it should be carried out.

The interval is different if the engine is a DEUTZ, MWM (CAT), Jenbacher or Guascor for example.

If we talk about DEUTZ/MWM (CAT) engines, the Overhaul is usually performed every 48.000 operating hours or 64.000 operating hours depending on the quality of the gas consumed by the engine. The higher the quality of the gas (natural gas), the longer the interval between Overhaul’s. Anyway, there are exceptions when it comes to very recent engines, their Overhaul being marked at 80.000 running hours if the gas quality is very high.

For Jenbacher engines, the current ones have the major Overhaul at 60.000 hours of operation (whatever type of gas they consume). Like the DEUTZ/MWM (CAT), the newly installed Jenbacher engines can extend their overhaul up to 80.000 operating hours.

And finally, in Guascor engines, the Overhaul if the engine consumes biogas, it is usually at 50.400 running hours while if it is natural gas, the intervention could occur at 60.000 running hours.

As a rule, an Overhaul is a complete maintenance of the engine, in which the wear components of both the upper and lower parts of the engine are replaced. Even so, RS Motor has the ability to offer its customers several types of alternatives in order to try to minimize the downtime of the power plant.

Sometimes, if the delivery time is not important, the Overhaul could be carried out at RS Motor’s facilities.

If the delivery time is a limiting factor, although not too important, RS Motor would move its team to the customer’s power plant to carry out the Overhaul.

If the delivery time is critical, RS Motor will make available to the client, as long as this is possible, an exchange “shortblock” or an exchange “longblock”.

Finally, if the delivery time is the most important factor, the possibility of supplying an exchange engine with the Overhaul already made could be considered. This engine would be fully assembled and would be “plug & play”, so the plant downtime would be the minimum.

Request a quote to RS Motor for an engine Overhaul

Customers around the world already trust RS Motor when they need to overhaul their industrial engines, whether they are gas or diesel.

Join them and ask us for availability and price if you want to try with us. Currently we can say that we are the best alternative to the Official Service offered by the brand, thanks to many years of experience in Service and the supply and installation of genuine and/or OEM spare parts.

Reconditioning an engine involves disassembling its mechanical elements, inspecting and verifying the state of the engine, cleaning the mechanical parts with ultrasounds and carrying out controls and/or hydraulic tests. Worn elements are replaced and the reconditioned engine is restored to zero hours.

Engine elements usually reconditioned in the «RS Motor» workshop are:

At RS Motor, we are specialists on performing Service and Overhaul over the industrial engines listed below: